“I checked the dictator’s heart and lived in luxury. But when revolution came, I realized the cost. In this week's Newsweek, Oksana Balinskaya talks about what it was like being the nurse for Libyan dictator Muammar Gaddafi.

I was just 21 when I went to work for Muammar Gaddafi. Like the other young women he hired as nurses, I had grown up in Ukraine. I didn’t speak a word of Arabic, didn’t even know the difference between Lebanon and Libya. But “Papik,” as we nicknamed him—it means “little father” in Russian—was always more than generous to us.

I had everything I could dream of: a furnished two-bedroom apartment, a driver who appeared whenever I called. But my apartment was bugged, and my personal life was watched closely.

For the first three months I wasn’t allowed to go to the palace. I think Papik was afraid that his wife, Safia, would get jealous. But soon I began to attend to him regularly. The job of the nurses was to see that our employer stayed in great shape—in fact, he had the heart rate and blood pressure of a much younger man.

We insisted that he wear gloves on visits to Chad and Mali to protect him against tropical diseases. We made sure that he took his daily walks around the paths of his residence, got his vaccinations, and had his blood pressure checked on time. 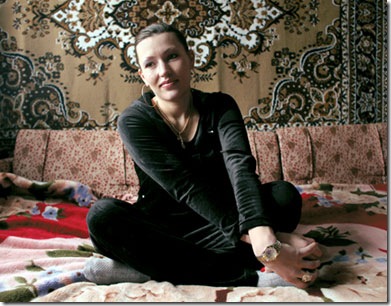 The Ukrainian press called us Gaddafi’s harem. That’s nonsense. None of us nurses was ever his lover; the only time we ever touched him was to take his blood pressure. The truth is that Papik was much more discreet than his friend, the womanizer Silvio Berlusconi.

Gaddafi chose to hire only attractive Ukrainian women, most probably for our looks. He just liked to be surrounded by beautiful things and people. He had first picked me from a line of candidates after shaking my hand and looking me in the eye. Later I learned he made all his decisions about people at the first handshake. He is a great psychologist.

Papik had some odd habits. He liked to listen to Arab music on an old cassette player, and he would change his clothes several times a day. He was so obsessive about his outfits that he reminded me of a rock star from the 1980s. Sometimes when his guests were already waiting for him, he would go back to his room and change his clothes again, perhaps into his favorite white suit.

When we drove around poor African countries he would fling money and candy out the widow of his armored limousine to children who ran after our motorcade; he didn’t want them close for fear of catching diseases from them. He never slept in a tent, though! That’s just a myth. He only used the tent for official meetings.

We traveled in great style. I accompanied Papik to the United States, Italy, Portugal, and Venezuela, and whenever he was in a good mood, he asked us if we had everything we needed. We would get bonuses to go shopping. And every year Papik gave all his staff gold watches with his picture on them. Just showing that watch in Libya would open any door, solve any problem that we had.

I got the impression that at least half the population of Libya disliked Papik. The local medical staff was jealous of us because we made three times more than they did—over $3,000 a month. It was obvious that Papik made all the decisions in his country. He is like Stalin; he has all the power and all the luxury, all for himself.

When I first saw television pictures of the Egyptian revolution I thought, nobody would ever dare to rise against our Papik. But there was a chain reaction after Tunisia and Egypt. If Papik had passed his throne to his son Saif when he still had a chance, I believe that everything would have been all right. People would not be dying right now.

I got out of Tripoli at the beginning of February, just in time. Two of my friends stayed behind, and now they can’t leave. I had a very personal reason for wanting to get out: I was four months pregnant, and I was beginning to show. I feared that Papik would not approve of my Serbian boyfriend.

Papik will probably never forgive me my betrayal. But I realize I did the right thing to flee Libya. My friends all told me I should think of my future baby and run. Now Papik’s closest partners are also running from him. And he is forcing his children and our two remaining Ukrainian colleagues to stay and die by his side.”

As told to NEWSWEEK’s Anna Nemtsova in Mogilnoye, Ukraine.