Maureen Dowds giftiga kolumn i söndagens New York Times.
WASHINGTON — THE Clinton campaign is shellshocked over the wholesale rejection of Hillary by young women, younger versions of herself who do not relate to her.
Hillary’s coronation was predicated on a conviction that has just gone up in smoke. The Clintons felt that Barack Obama had presumptuously snatched what was rightfully hers in 2008, gliding past her with his pretty words to make history before she could.
So this time, the Clintons assumed, the women who had deserted Hillary for Barack, in Congress and in the country, owed her. Democrats would want to knock down that second barrier.
Hillary believed that there was an implicit understanding with the sisters of the world that now was the time to come back home and vote for a woman. (The Clintons seem to have conveniently forgotten how outraged they were by identity politics when black leaders deserted them in 2008 to support Obama.)
This attitude intensified the unappetizing solipsistic subtext of her campaign, which is “What is Hillary owed?” It turned out that female voters seem to be looking at Hillary as a candidate rather than as a historical imperative. And she’s coming up drastically short on trustworthiness.
As Olivia Sauer, an 18-year-old college freshman who caucused for Bernie Sanders in Ames, Iowa, told a Times reporter: “It seems like he is at the point in his life when he is really saying what he is thinking. With Hillary, sometimes you get this feeling that all of her sentences are owned by someone.”
Hillary started, both last time and this, from a place of entitlement, as though if she reads her résumé long enough people will surrender. And now she’s even angrier that she has been shown up by someone she considers even less qualified than Obama was when he usurped her place. 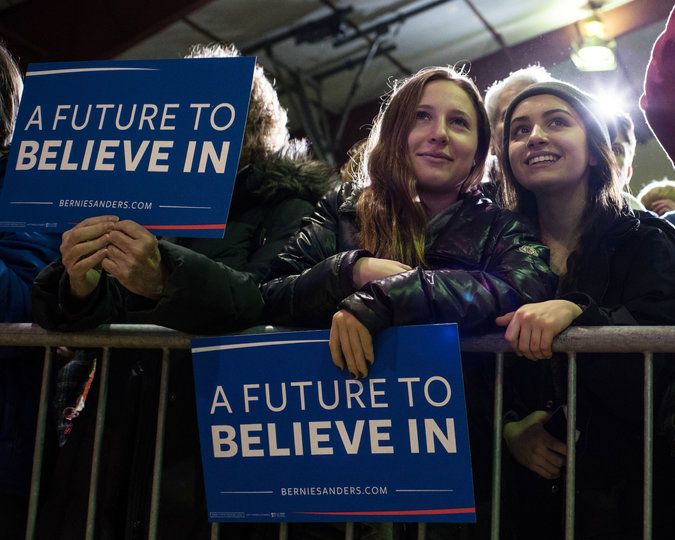 Bernie has a clear, concise “we” message, even if it’s pie-in-the-sky: The game is rigged and we have to take the country back from the privileged few and make it work for everyone. Hillary has an “I” message: I have been abused and misunderstood and it’s my turn.
It’s a victim mind-set that is exhausting, especially because the Clintons’ messes are of their own making.
On the trail in New Hampshire, Madeleine Albright made the case that it was a betrayal of feminist ideals to support Bernie against Hillary, noting that “there’s a special place in hell for women who don’t help each other.” When Sanders handily won the women’s vote on Tuesday, David Axelrod noted dryly that they were going to need to clear out a lot of space in hell.
And in a misstep for the feminist leader who got famous by going undercover as a Playboy bunny, Gloria Steinem told Bill Maher that young women were flocking to Bernie to be where the boys are. Blaming it on hormones was odd, given the fact that for centuries, it was widely believed that women’s biology made them emotionally unfit to be leaders.
What the three older women seemed to miss was that the young women supporting Sanders are living the feminist dream, where gender no longer restricts and defines your choices, where girls grow up knowing they can be anything they want. The aspirations of ’70s feminism are now baked into the culture.
The interesting thing about the spectacle of older women trying to shame younger ones on behalf of Hillary is that Hillary and Bill killed the integrity of institutional feminism back in the ’90s — with the help of Albright and Steinem.
Instead of just admitting that he had had an affair with Monica Lewinsky and taking his lumps, Bill lied and hid behind the skirts of his wife and female cabinet members, who had to go out before the cameras and vouch for his veracity, even when it was apparent he was lying.
Seeing Albright, the first female secretary of state, give cover to President Clinton was a low point in women’s rights. As was the New York Times op-ed by Steinem, arguing that Lewinsky’s will was not violated, so no feminist principles were violated. What about Clinton humiliating his wife and daughter and female cabinet members? What about a president taking advantage of a gargantuan power imbalance with a 22-year-old intern? What about imperiling his party with reckless behavior that put their feminist agenda at risk?
It rang hollow after the Anita Hill-Clarence Thomas hearings. When it was politically beneficial, the feminists went after Thomas for bad behavior and painted Hill as a victim. And later, when it was politically beneficial, they defended Bill’s bad behavior and stayed mute as Clinton allies mauled his dalliances as trailer trash and stalkers.
The same feminists who were outraged at the portrayal of Hill by David Brock — then a Clinton foe but now bizarrely head of one of her “super PACs” — as “a little bit nutty and a little bit slutty,” hypocritically went along when Hillary and other defenders of Bill used that same aspersion against Lewinsky.
Hillary knew that she could count on the complicity of feminist leaders and Democratic women in Congress who liked Bill’s progressive policies on women. And that’s always the ugly Faustian bargain with the Clintons, not only on the sex cover-ups but the money grabs: You can have our bright public service side as long as you accept our dark sketchy side.
Young women today, though, are playing by a different set of rules. And they don’t like the Clintons setting themselves above the rules.