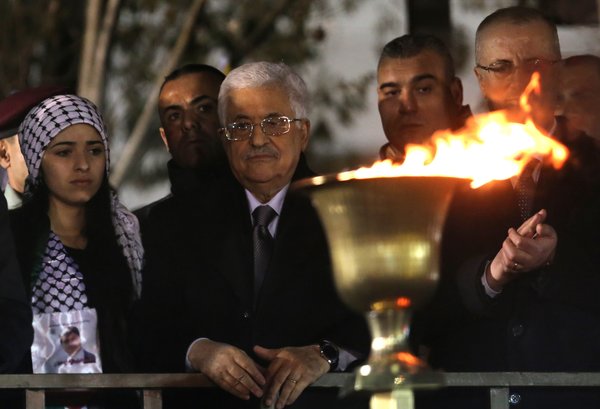 President Mahmoud Abbas of the Palestinian Authority celebrated the 50th anniversary of the Fatah movement on Wednesday in the West Bank city of Ramallah.

JERUSALEM — President Mahmoud Abbas of the Palestinian Authority signed papers Wednesday to join the International Criminal Court, a provocative move that could lead to the prosecution of Israeli officials on charges of war crimes and risks severe sanctions from Washington and Jerusalem.

The defiant step came a day after the defeat of a United Nations Security Council resolution that demanded an end to Israel’s occupation of Palestinian territory by 2017, and was billed as part of a strategic shift by the Palestinian leadership to pursue statehood in the international arena after decades of failed American-brokered negotiations with Israel.

“There is aggression practiced against our land and our country, and the Security Council has let us down — where shall we go?” Mr. Abbas said at his headquarters in the West Bank city of Ramallah, as he signed the Rome Statute, the founding charter of the court, as well as 21 other international treaties and conventions.

“We want to complain to this organization,” he said of the court. “As long as there is no peace, and the world doesn’t prioritize peace in this region, this region will live in constant conflict. The Palestinian cause is the key issue to be settled.”

Mr. Abbas, whose popularity has plummeted since this summer’s battle between Israel and Hamas, has been under increasing pressure from the public and other Palestinian leaders to join the court, and use it to pursue cases against Israel’s settlement policy and military operations. But doing so could have major repercussions, both because Palestinians could also face charges at the court, and because Israel and the United States Congress have promised to respond harshly.

“There is no question mark as to what are the consequences, that there will be immediate American and Israeli financial sanctions,” said Khalil Shikaki, director of the Palestinian Center for Policy and Survey Research in the West Bank city of Ramallah. “Those sanctions will gradually become more and more crippling, and this could indeed be the beginning of the end of the P.A. They fully realize that.”

A December poll by Mr. Shikaki’s group showed 35 percent of Palestinians approved of the president’s performance, down from 50 percent before this summer’s war, and that if there were elections, Mr. Abbas, of the secular Fatah party, would lose to his rival from Hamas, the militant Islamist faction that dominates the Gaza Strip. With reconstruction of Gaza after the summer’s devastating war stalled amid ongoing acrimony between Hamas and Fatah despite an April reconciliation pact, analysts said Mr. Abbas was increasingly desperate to show he was doing something.

“They have to take some meaningful steps to recover anything of their really shredded credibility,” Nadia Hijab, executive director of Al-Shabaka: The Palestinian Policy Network, said of Mr. Abbas’s team.

“That fig leaf of action is growing steadily more tattered,” she added. “They keep saying it’s a new paradigm and they want to use international tools, but now they have actually been put on the spot.”

After a ceremony at his Ramallah headquarters marking the 50th anniversary of Fatah’s founding and a leadership meeting, Mr. Abbas signed the official papers to join the Rome Statute, the Hague-based court’s founding treaty. The Palestinians have to wait 60 days before they can file cases at the court, a window some in Washington are counting on to calm the situation.

But with Israeli elections scheduled for March 17, Prime Minister Benjamin Netanyahu and other Israeli politicians may be eager to show a strong response to what they have long denounced as an aggressive, unilateral move. Earlier on Wednesday, one of Mr. Netanyahu’s close allies, Yuval Steinitz, called Tuesday’s United Nations vote “no less dangerous than Hamas’s rockets,” saying the fact that France supported the resolution and Britain abstained “is very grave.”

Wednesday’s signing came eight months after a similar move in April, when Mr. Abbas stunned Washington and Israel by joining 15 international treaties and conventions as nine months of American-brokered peace talks neared collapse. Those included the four Geneva Conventions of 1949 and additional protocols of 1977 on the laws of war, along with ones dealing with discrimination against women and children.

The International Criminal Court is a much more significant step. Created in 2002 to prosecute perpetrators of genocide, crimes against humanity and war crimes, the court currently has 122 member countries, and has mainly dealt with horrors in Africa.

The Palestinians asked the court in 2009 to investigate Israeli actions during Operation Cast Lead, a three-week military offensive in Gaza, but were rejected because they lacked the required United Nations status. A 2012 vote in the United Nations General Assembly upgraded Palestine’s status to non-member observer state, and some Palestinians have been urging Mr. Abbas to sign the Rome Statute ever since.