The Race to Run the United Nations

For the past 70 years, each time the post of secretary general of the United Nations has been open, those interested in the job lobbied and cajoled the five permanent members of the Security Council behind closed doors. The Council chose the finalist, whose name was then presented to the General Assembly as a done deal. This obscure process for selecting one of the world’s most important leaders has gone unchallenged for decades.

Not anymore. The race to replace Ban Ki-moon, who will step down at the end of the year, fortunately, will be different. At the insistence of small nations that traditionally had no say in the matter, the United Nations has asked that governments that wish to nominate a candidate for the job do so openly. Next week, diplomats from the United Nations’ 193 states will have an opportunity to meet and question the four women and four men who are vying for the job.

The next secretary general will face a series of challenges that will require deft leadership and tenacity. The United Nations needs to play a central role in ending wars in Syria, Libya, Yemen and elsewhere, even as it struggles to provide resources and aid to millions of refugees who have fled Syria and other countries roiled by war.

The new leader will also inherit internal problems. The United Nations was slow to acknowledge and respond to allegations of widespread sex abuse by peacekeepers in Africa, a situation that could destroy its reputation and credibility in areas already struggling with the ravages of war and famine. The World Health Organization, which came under criticism for its inadequate response to the Ebola crisis in 2014, will also require sustained attention.

Those vying for the job will need to clearly outline their priorities and vision for a job that becomes ever more daunting in a conflict-ridden world.
Upplagd av Anders Carlgren kl. 16:37 Inga kommentarer:

A previously unseen video of one of Britain's most infamous spies describing his career as a Soviet agent has been uncovered by the BBC.
The tape is of Kim Philby giving a secret lecture to the Stasi, the East German Intelligence Service, in 1981. It is the first time the ex-MI6 officer can be seen talking about his life as a spy from his recruitment to his escape. He describes his career rising up the ranks of MI6 whilst providing its secrets to the Soviet Union's KGB. He ends with advice to the East German spies. 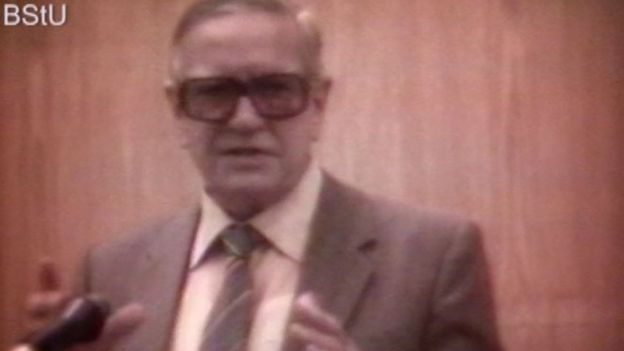 "Dear Comrades." With those two words spoken in an impeccable upper-class English accent, one of Britain's most famous spies and its greatest traitor begins a masterclass in betrayal to a select audience of East German spies.
Philby's hour-long address was preserved on video tape and never seen in public until now.
The BBC unearthed it in the official archives of the Stasi in Berlin.
It was never made for public consumption (and the grainy video and poorly synchronised sound shows the limits of technology at the time), but that means the former MI6 officer is open about his career in a way never heard before.

After an introduction from East German spymaster Markus Wolf, who was so elusive to western spy agencies that he was known for many years as "the man without a face", Philby makes his way to the lectern to a hero's welcome.
"I must warn you that I am no public speaker," Philby says. "I've spent most of my life trying to avoid publicity of any kind."
That much is true. Previously the best known video of Philby was him giving a 1955 press conference in his mother's London flat. On that occasion he said very little, only denying he was a communist. In this newly discovered video, for the first time, we hear Philby himself boast about what he calls his "30 years in the enemy camp".

He describes himself as born into "the ruling class of the British Empire" and explains how he first was drawn towards communism at Cambridge. He details his recruitment by the Soviet intelligence service, later known as the KGB, after he returned from working with activists in Austria.
The most surprising thing about his recruitment, he says, was that it happened at all since he had no real job or prospects at that moment.
"It was essentially a long range project. No immediate results were expected or could have been expected." He says his Soviet contact did express his ambitions for his recruit. It was made perfectly clear to me that the best target in the eyes of the Centre in Moscow would be the British Secret Service."
Philby details how he spent years trying to work his way in - turning to journalism, working for The Times newspaper, covering the Spanish Civil War, building up contacts in the establishment and then as war came dropping hints about his desire to work for government.
At last, he was interviewed and accepted in to the inner sanctum of the British state - the Secret Intelligence Service - SIS (or as it is popularly known MI6).
In one of the most remarkable sections of the talk, Philby then reveals just how easy it was to steal secrets from Britain's secret service. He says that he simply made friends with the archivist who managed the files by going out two or three times a week for a drink with him.
This allowed Philby to get hold of files which had nothing to do with his own job.
"If there had been proper discipline in the handling of papers in SIS that would have been quite impossible. But there was, in fact, no discipline."
Philby goes on to explain what he did with all the documents.
"Every evening I left the office with a big briefcase full of reports that I had written myself, full of files and actual documents from the archive."
"I used to hand them to my Soviet contact in the evening."
"The next morning I would get the files back, the contents having been photographed and early the next morning I would put them back in their place. That I did regularly year in year out."

Philby, a Soviet agent, is then appointed number two in a new MI6 section, devoted to countering Soviet espionage. His KGB handler next instructs him to get the top job by removing his boss, Felix Cowgill.
"I said 'Are you proposing to shoot him or something?'" Philby recalls asking.
Instead his instructions were to use bureaucratic intrigue.
"So I set about the business of removing my own chief. You oughtn't to listen to this," he tells the audience of secret service officers to considerable laughter.
He succeeded.
"It was a very dirty story - but after all our work does imply getting dirty hands from time to time but we do it for a cause that is not dirty in any way," Philby explains.


"I have to admit that was the most blatant intrigue against a man I rather liked and I admired but the instructions stood and nothing I could do would alter them."
There is one episode which is usually cited to illustrate the human cost of Philby's treachery.
When he was posted to Washington DC as MI6's liaison with the CIA and FBI, he betrayed an operation to secretly send thousands of Albanians back into their country to overthrow the communist regime. Many were killed. In his lecture, Philby tries to turn it to his credit - even claiming he helped prevent World War Three.
He claims that if he had not compromised the operation and it had succeeded, the CIA and MI6 would have tried it again in countries like Bulgaria. He says the Soviet Union would then have become involved, leading to an all-out war.

While he was in Washington, two fellow Cambridge spies, Guy Burgess and Donald Maclean, fled to Moscow, leading to suspicions about Philby and his interrogation. He says there were two reasons why he got away with his espionage for so long.
The first was the British class system, which could not accept one of their own was a traitor. The second was the fact that so many in MI6 had so much to lose if he was proven to be a spy.
Philby did officially leave MI6 but remarkably was soon taken back. He became an agent based in Beirut under cover of being a newspaper journalist. This allowed him to resume his spying.
Philby ends the formal section of his talk with an account of his escape from Beirut which he uses to mock MI6. In 1963, an MI6 colleague came to confront him with new evidence pointing to his work for the Soviets. Philby bluffed and stalled. Another MI6 officer was then left to watch over him.
But that man was an avid skier. Philby says that news came in of a fresh snowfall and the officer could not resist heading off to the Lebanese mountains to make the most of it. At that point, Philby got the signal from the KGB for his departure and was able to slip away.
Philby then sits down and takes questions from the East German spies. A fascinating first answer explains how he first acquired his communist beliefs and was then able to hold on to them despite living in the West.
He praises his Soviet handler and advises his audience that they need to take care of the political as well as physical health of any agents they run. Philby finishes with one piece of advice to the spies gathered before him that had served him well: never confess.
"If they confront you with a document with your own handwriting then it's a forgery - just deny everything… They interrogated me to break my nerve and force me to confess."
"And all I had to do really was keep my nerve. So my advice to you is to tell all your agents that they are never to confess."
This video, designed to be secret, is a chance to see Philby giving his own account of his life as a spy.
The tone is one of total self-confidence.
Philby died in Moscow in 1988 just before the collapse of the Communist ideal which he had spent his life serving.